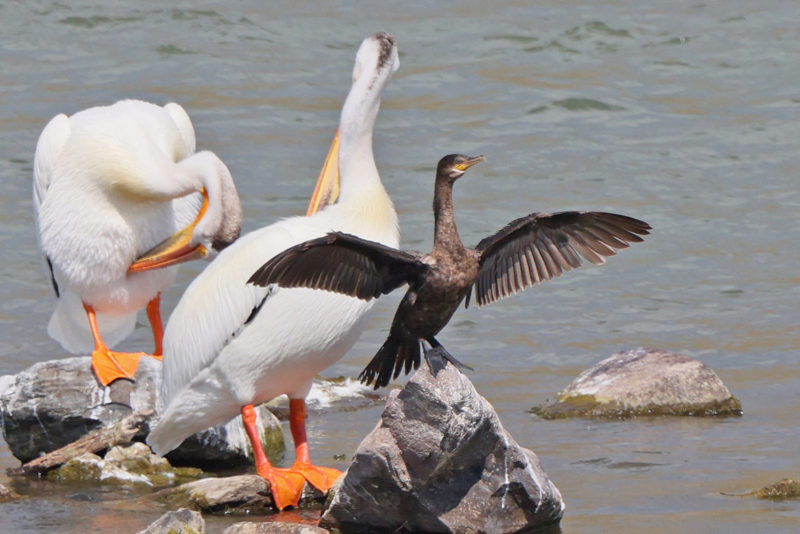 June was a big surprise.  June can be considered a “slow” birding month because spring migration is complete, many birds have stopped singing to spend time with nesting activities.  Fall migration gets going in July.  But, if you don’t look, you won’t see them.  What was seen?  To start off – I managed to observe 104 different species.  The furthest trip was to Arod and Freezout Lakes on June 12th.  The biggest surprise and mystery was the report of a Neotropical Cormorant at Giant Springs State Park the morning of June 23rd.  Less than a week earlier the very first report of one in the state of Montana was in Billings.  It was still being seen when this bird was found.  Alex Lamoreaux was with a group of birders that spotted it and quickly reported the rare sighting.  I found out about it while I was waiting for “quitting time”.  I dropped everything, locked the doors and was headed out within 15 minutes.  The location was clearly described as “upstream of Steamboat Island” in the mix of Double-crested Cormorants.  I grabbed a field guide and reviewed the identification on the way to Giant Springs (I wasn’t driving).  My husband and I searched the area for 90 minutes.  A group of fledgling cormorants didn’t make the task easier.  We were looking for a 23” cormorant with a long tail, slim body and lacking the big orange gular pouch.  Even the fledglings Double-crested Cormorants were adult sized (33”).  I finally spotted something down on the “gull rock” that caught my eye.  It took off and flew upriver towards us and landed in the river.  It did some fishing, then was gone.  It appeared to be smaller and didn’t have a big orange area.  It was too far for pictures and no bird next to it to compare size.  I told my husband “I think that was it, but I’m coming back at first light in the morning to look again”.  We quickly found it on the morning of the 24th.  It was on the rocks above Steamboat Island where there are frequently cormorants and pelicans.  We spent a fair amount of time trying to get some good pictures.  I’ve seen it a number of times since then.  How long had it been there?  It wasn’t hard to find if you were looking for it, but it is easy to pass over a group of cormorants as “just cormorants”.  It is found year-round on the coast of Texas and into Mexico.  There have been a few reports of birds in South Dakota, Colorado, Utah, Kansas and other states around Montana.  It really wasn’t unexpected that it was finally seen and documented.  How long will it be around?  Will it return next year?  Are there others hiding in the state?  It is a “lifer” that I look forward to finding again.

There weren’t a lot of new birds to add to the year’s list this month.  The total is up to 162 species at the end of June.  Birds added were Common Nighthawk, Grasshopper Sparrow, Black Tern, Lark Bunting, Baird’s Sparrow, Neotropical Cormorant, Brewer’s Sparrows, Burrowing Owl, and White-throated Swift.